24-hour Ultraskaters push a new envelope in distance skateboarding, cramming epic mileage into the span of a single weekend.

Its simplicity is key. All that one needs to Ultraskate is

Ultraskating is one of the most accessible, inclusive uber-distance skateboard challenges, which doesn’t require quitting your job, abandoning the family, or a trust fund budget to commit.   Its rewards are personal and varied, like the group of people drawn to it.

This page starts with the latest action in Ultraskating, moving chronologically backward, with a little story on the history, and the current World Rankings at the bottom.    (also found on the Records page)

And Congrats to Kyle Yan and Jonathan Koning on joining the 300-mile club!

And Congrats Rosanne de Lange for joining the 250-mile club! 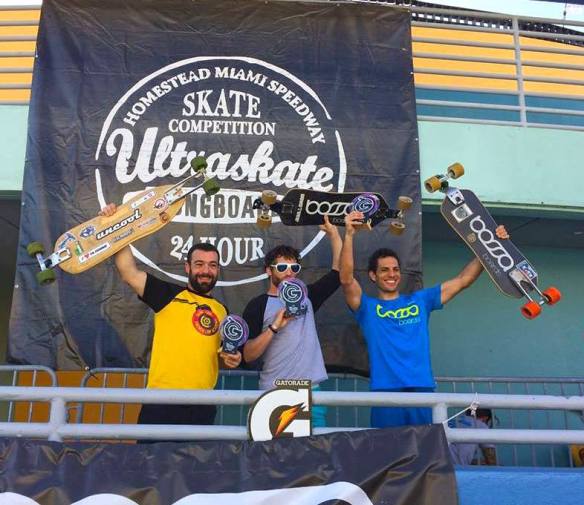 Ride Review from Shumie Loo of the Netherlands:

Here is my recap of the Miami ultraskate 2017.

Before starting the race Felipe Scolfaro Crema (new 250 club member), Adrian Oh (250 club member), Rosanne de Lange (world record holder twice!) and I (250 club member) came up with the 250 mile train plan. The idea was to stick together and pull each other through the hard challenge, which is called the Ultraskate! I could not have made the 262 miles without you guys!

It started of pretty good, I was blown away by the big track plus blown away again because of the wind on the track! The wind was mighty but while the wind tried to slow us down, we still kept pushing trough. By switching the lead we could save our energy for when the real race began. My Sway team rider Saskia Tromp joined for some laps with the train as well. The real race begins at after 12 o’clock in my head. Because then the mental game is going to challenge your body to quit. I think that pure luck won’t let most people pass the 250 mile, to reach the 250 mile you need some preparation, planning and good support! I thank Jery Baan and Pat van Board from the Vandra crew for the support! And Jery, man… he is the fastest support runner I’ve ever seen. He almost ran faster than I could board!

It was also nice to see the Vandra team ride so damn hard each time they lapped me. All my respect to them because they reached their goal and beyond! The team consisted of Rick Pronk, Lennart Van de Peppel, Stan Bekker and Jonathan Koning. They are the All-star team of the Netherlands. They were the top 4 from the Dutch ultraskate 2016, I was the 5th. That’s why I call them the Dutch all-star team.

After 8 damn hours I finally knew how to ride the track as efficient as possible. For example when to push and when to pump. I’ve also paid attention to my fellow skaters and I really like that everyone has their own style of moving forward on the board. The paddlers were kinda scary with their big poles. When they push with the poles it is best not to draft too close behind if you don’t want to taste the pavement.

At night I joined French club for a while, Man they still could go fast after so many hours! I also joined a lap with Rosanne, pat and James Peters which was on a nice pace. This was a warm up lap because 4 hours before the end of the race I went solo with a mission to get as high as possible. This is the moment when the inner battle begins. From that point on it was time to push and pump as hard as possible to get as high as possible. The late hours is where I wanted to climb up the rankings, and I did. From what I’ve heard I climbed all the way up from rank 19 till rank 4 overall! Good job to the top 3 Kyle Yan, JJ Cobb and Kaspar Heinrici.

I want to thank everyone who make nice pictures and have respect for everyone who joined the race!
Thanks to Sway Longboards for sponsoring my board, Dont-Trip Skateboards and G|Bomb for the awesome winners gear and also Andrew Andrasw, Joner Strauss and James for organizing this amazing event!
But don’t forget all the people who were cheering for us and following the race online and the support of my girlfriend Daphne Vonk!! 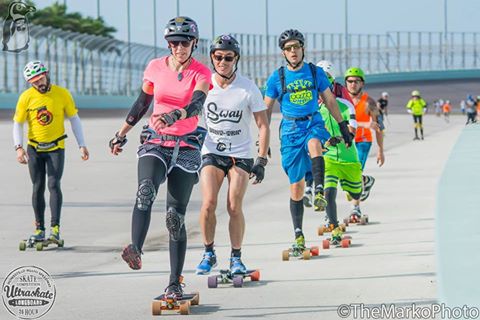 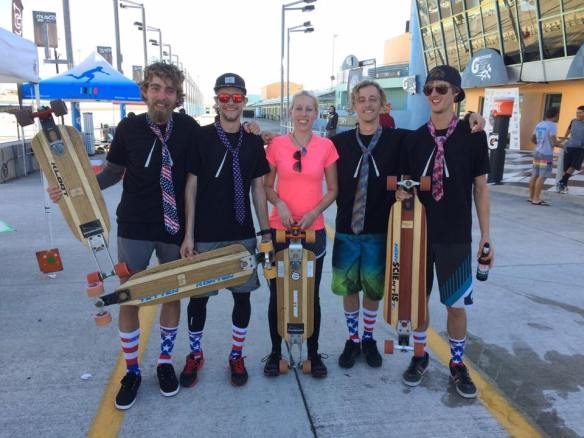 Magic happened at the Dutch Ultraskate 2016. 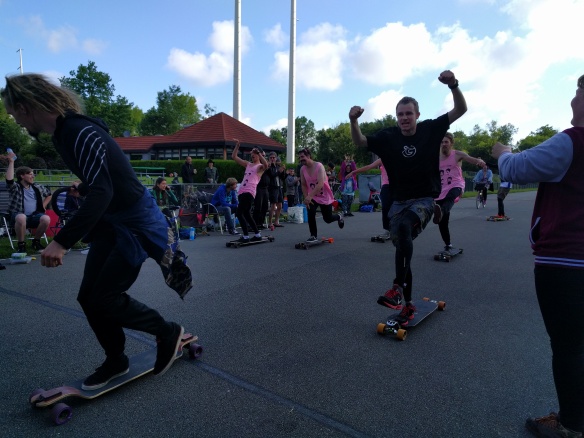 Rick Pronk nearly ties Andy’s 309.5-mile record!   Technically it was the length of the laps of the track that kept him from “officially” being tied, as there were several minutes left on the clock. 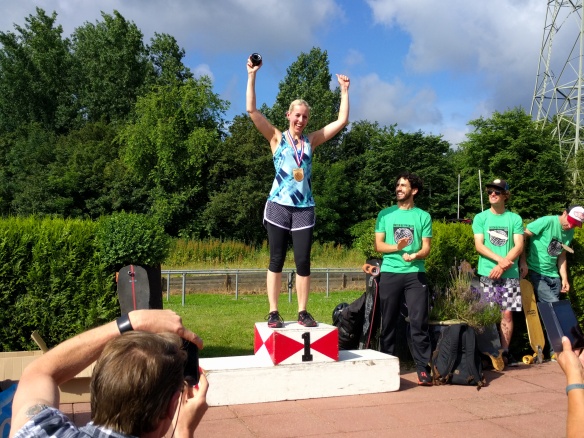 Experience the Ultraskate – Will Frank’s Interview after Miami 2014 Ultra

The only year we skated the longer inside 2.2-mile loop.   A little nice for the variety, but as cars tear up the asphalt on the sharp turns, it was chunky!   Decided in all future ultras here to go the 1.6-mile outside loop for better conditions. 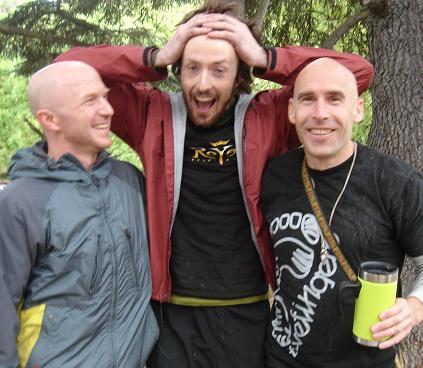 The world’s first skateboard-specific Ultraskate event took place in May of 2007.  James Peters drummed up donations for LIVESTRONG, and this first record attempt was made mainly to draw attention to the charity by establishing a recognized Guinness World Record.

Before this Ultra, three other 24-hour skateboard attempts are known, one as part of an inline skate event by Romain Bessiere of France, and the other two (Greece-1983 and France-1978) still require more digging and are mentioned on the Pavedwave forum here.

After the 2nd solo attempt in Seattle in fall 2007, plus a little media coverage, the event started capturing the eyes of other skaters, and by spring of 2008, Eric Lowell flew up from Texas to join in the 3rd Ultraskate, where he logged a solid 187 miles and supported James past the 200-mile mark. 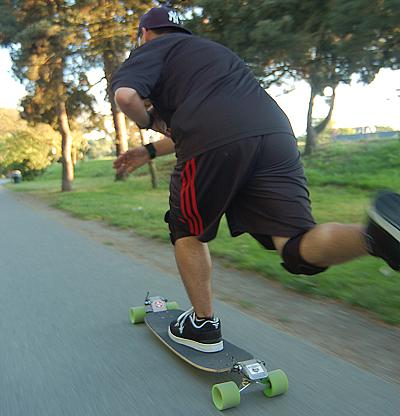 That “200” number triggered a simian instinct in Barefoot Ted McDonald, who at the time was observing us from the sidelines. Being a seasoned ultrarunner and born-again skater, he returned a couple months later to knock out an astounding 242 mile skate, a record that held fast for a full year.  The Canadian Paul Kent’s trip to Seattle paid off a year later, as he pushed his way past Ted by another 8 miles, thus setting the bar at a formidable 250 miles + some change.

All the first records were set in Seattle, at the Greenlake park 2.8-mile loop, and sometimes linked with the Burke-Gilman 50-mile round trip path to keep things interesting.

During these formative years, organized Ultraskates also caught on in the Netherlands, New Zealand, Australia, the UK, and many other areas of the US.   The early synchronized ultraskates were “by design” – since the number of skaters willing to throw down 24 hours straight was expected to be quite low, James would post the ultraskate plans in advance on silverfishlongboarding, ncdsa, and pavedwave forum, either synching start times or at least roughly competing with each other on the same weekend, around the globe.

Conan Isaac Gay from Eugene OR had heard of Barefoot Ted’s 242-mile record, and took up the challenge in a traditional solo effort.  He had just a few supporters and almost no media coverage.  He also wasn’t aware of the original rule of the Ultra which excluded having a gravitational advantage  (in order to make the event competitive worldwide) so he designed his course to include coming down a miles-long hill before finishing the remaining day of skating.   Ultimately, he reached 221 miles which is established as the one and only “gravity based” ultraskate record – and he has since crushed that record multiple times over on the flats!  Conan is a huge advocate of distance skateboard racing and hosted a highly successful, IDSA-sanctioned 5k / 10k race event in 2016, attended by skateboarders across the US.

Jo Coles’ notable 2010 charity for Haiti, dubbed “Skaiti”, brought quad skaters into the mix, and was held at the famous Top Gear track near London, where women like Jo and Laura Hatwell added their names to the 100+ mile list.

Jo held the women’s world record for a couple years, and attempted several Ultras before pulling of the biggest one in UK.   Her spirit and stoke for LDP is captured well in this write-up on the forum:  http://pavedwave.myfastforum.org/ftopic1199-0-asc-45.php 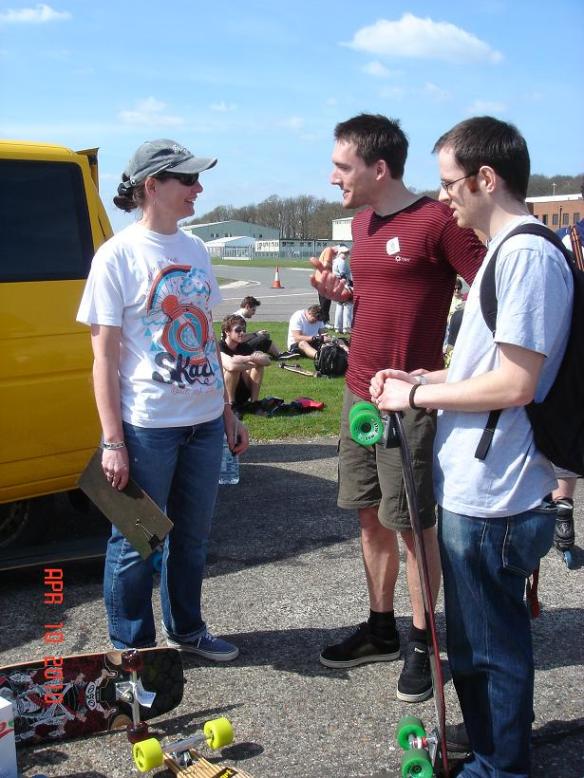 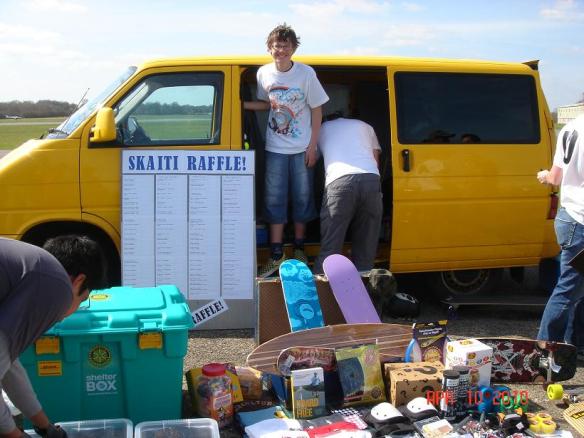 Back when we could still count the number of ultraskates on hands and toes, Ultraskate #12 may have been the biggest in terms of synchronized countries:  The Netherlands, UK, Australia, and the US all threw down on the same weekend in 2010.

The landscape was clearly changing, with young skaters from the Netherlands making up nearly 1/3rd of the “200-mile club” and totaling well over 100 skaters who surpassed the 100-mile mark.   From early on the Dutch have made a huge mark in the Ultraskate, building community, spreading stoke, making courses fully legit with pro timing systems, and filling up the records with amazing mileage.  But the photo albums after their races capture what is really happening over there – positive vibes and killer events. 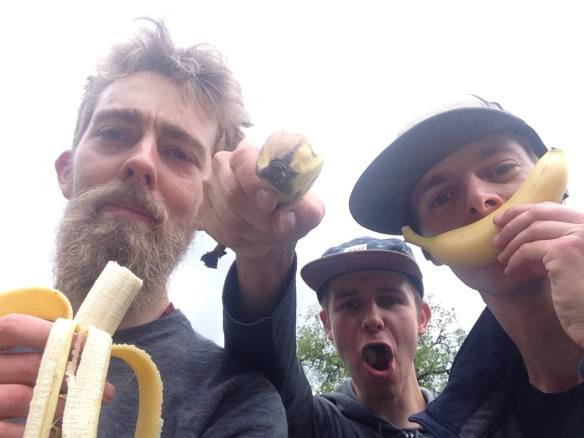 Worldwide skaters continued challenging themselves and besting their previous times, which goes straight to the soul of the Ultraskate.  Yet none had yet crested that elusive 250-mile mark.

Until “La Maquina” aka THE MACHINE came along.  Andrew Andras, no stranger to extreme endurance events in his free time and even on the job  (a Miami firefighter by trade)  set the new stage for what it takes to strategize, prepare, and perform each minute of those 24 hours.   In 2013 he finally beat Kent’s record with a 261.8-mile Ultra on the Miami Homestead speedway, leaving everyone in awe.

But none could have guessed what came a year later.   Andy The Machine lived up to his name and crushed his own mark, with an incredible 283.2 miles.   And at the same 2014 event, Claudia Clase threw down the women’s new stake in the ground with an incredible 194 miles, upsetting the previous record by Colleen Pelech.

In summer of 2015 The Netherlands crew hosted one of the biggest Ultras to date, and bumped the top slot up to be shared by two incredible endurance athletes — Rick Pronk and Andy Andras tying for a finish and World Record of 285.7 miles!    And in that year of repeats, Claudia Clase once again bested her previous record AND joined the 200-mile club, with a formidable 202.94 miles other women had to strive for. 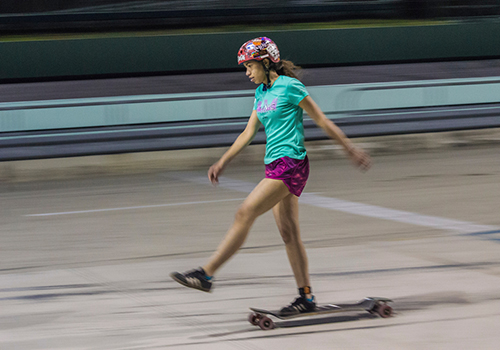 Standup Paddlers made a show of force that promises to continue in the years ahead, with guys like DeeJay Pascua joining the 200-mile club strictly by paddle.

The banana-fueled powerhouse of Dutch skaters put together an excellent website dedicated to Ultraskate, Netherlands style! 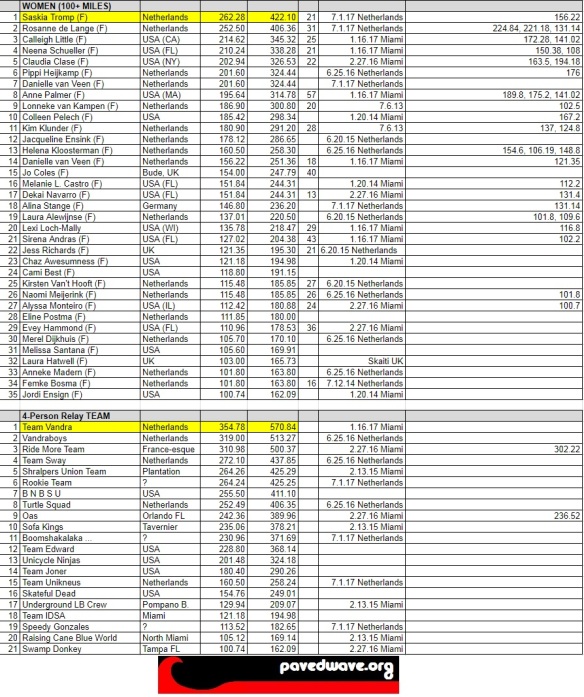 The scene has evolved.  Who knows what is coming next?